syntax in effect. (or lack thereof.)

I think it is fair to say that I am obsessed with grammar and spelling. Nowadays, however, with the onslaught of everything social media, texting, email vs. snail mail, etc., it just doesn't seem to matter to most people.

A few things I see on the daily that make me cringe: alot (and thank you Blogger for putting a dotted red line under that word), your for you're, it's for its...but nothing makes me more crazy than the RANDOM APOSTROPHE. See below. 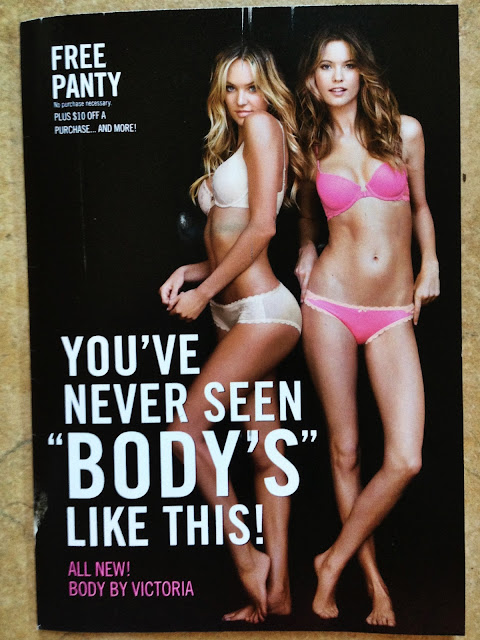 This promotional piece I just received in the mail from Victoria's Secret may be the worst ever. And by such a huge corporation!!!

OK, I get what you're going for here. You aren't referring to the bodies on the models, but instead the Body bra. So you want to take some grammatical freedom with that by adding just an -s instead of -ies. Fair enough to get your point across. And I also see that the quotations are there to reiterate the point that you're just being cheeky (pun intended). BUT WHAT IS THE APOSTROPHE DOING IN THERE?!?! WHERE IS THE POSSESSION?!?!?!

Poor job, Vicky. Very poor job. I can only imagine how many eyes were on this before it was sent for print. Looks like you have some fixin' to do. <-- See that, there? THAT is how to correctly use an apostrophe not intended for possession.